This is my absolute best attempt to great a HUGE guide to the amazing (& must see!) churches in Florence. Does this cover it all? Not even close. But this is definitely THE ultimate art historian’s guide to a religiously and artistically bent trip to Florence. Enjoy!

So this church is seriously ugly on the outside, like atrocious and I’ll be honest, it isn’t that fantastic on the inside either. Brunelleschi chose a very minimalist Renaissance geometric style over the more ornate Gothic style (so it is an art historically important church). But, I would have totally skipped this church if it wasn’t the resting place for the Medici. So if you are a history buff and you cannot live without seeing their tombs, go for it. Otherwise, just enjoy the fantastic leather market set up around San Lorenzo.

Our apartments were right around the corner from Santa Croce so I ate breakfast everyday under its gorgeous facade 🙂 Santa Croce sticks for a few reasons:

The Bardi Chapel is of particular interest to me because of frescoes of St. Francis’ life by Giotto. I love the “quiet” style Giotto displays here because I feel like it matches the life of St. Francis well. St. Francis started the Franciscan group and Santa Croce is an ordained Franciscan church…so that makes sense.

The Cathedral (seat of the bishop) is usually the biggest and most important church in a city. Santa Maria del Fiore is no exception! The church standing today is actually built over the 4th century Santa Reparata, which you can visit by paying an extra couple of euros once inside (totally worth it!).  The interior of the church is notable for the interior dome fresco by Vasari that you can get pretty close to by doing the rooftop tour, the fabulous mosaic floor that must be appreciated from up high, and a couple of frescos exciting for any student of art history: Paolo Uccello’s Sir John Hawkwood & Andrea del Castagno’s Niccolò da Tolentino.

This dome actually made me tear up the first time I saw it coming into Florence…pathetic, I know! It was a feat of Renaissance engineering and was the BIGGEST dome of its time. Previously, no one could figure out how to build something to massive and the Pantheon stood as the biggest dome for over a 1,000 years. You can climb up and in between the inner and outer shell of the dome, if you are not scared of heights or claustrophobic in any way this is a MUST do in Florence. You can’t beat the views from the top!

So this “church” is actually underneath the current Cathedral. I include it because it’s cool to go down into the crypts of the Cathedral to see the foundations of this 4th century church; the couple of euros are worth it.

Read more: Florence: The city of rebirth, art, and the Medici

Not many people visit Santa Felicita because it is on the opposite side of the river, the Oltrarno, from most everything else in Florence but if you are an art history fan, it is totally worth the 5 minute walk. I came to this church not for the architecture but for a Mannerist painting that years later I actually teach in AP Art History! BONUS! That painting is the Deposition by Jacopo Pontormo (1528).

I’m going to start off by explaining Mannerism, because most people are only familiar with the “traditional” Renaissance art and this strikes the eye a little strange. Mannerism is a bridge period that connects the art of the Italian Renaissance with the Baroque. I like to explain it as a little like Alice in Wonderland: things are slightly strange but you can’t quite put your finger on it at first. Colors are a little garish, figures are contorted and elongated and the distribution of figures on the picture plane are uncomfortable for the viewer.

To actually view this image in Santa Felicita you have to put money in the meter to get some light. And I can tell you from experience the light is on hardly long enough to deeply look at it and take a picture 🙁 BOOOO! Also, you are stuck behind an iron fence the whole time.

So the most notable thing about this church is the Brancacci Chapel, the group of people crowding to get in and ignoring everything else in the church will clue you in. Masaccio expertly painted the whole chapel and his most notable fresco was Tribute Money. Massacio is known as a proto-Renaissance artist because he is seen as a bridge between Medieval art and the more humanistic art of the Renaissance. The “rebirth” of perspective, “weighty-ness” and naturalism are clearly evident here.

This is the church right next to the train station, like you walk out and BAM! the church nearly hits you (or I guess you nearly hit the church…). This church is strikingly different than Santa Croce, which makes sense because it was created by and for the Dominicans, theologically opposite from the Franciscans. 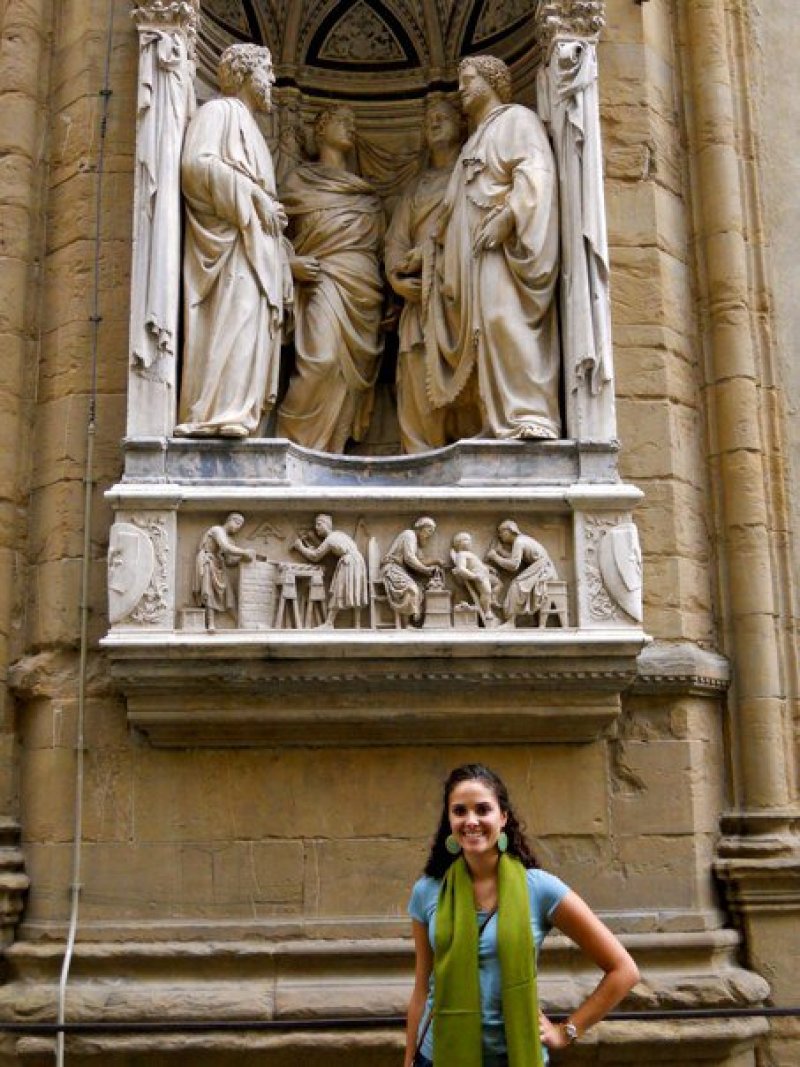 This is an atypical church, it was originally the city’s grain market and then became the church for the guilds of the town. Each guild was asked to fill the empty niches on the exterior with statues of their patron saints. Today the statues are replicas but you can go inside the church to the museum to see the originals. Honestly the ones are the exterior are better because you can see how people were meant to interact with them.

It’s not a very photogenic week, but it was a bu

This week doesn’t have much going on: pictures o

In case you missed the memo it was still the Chris

First week of Winter Break update (a week late #so

Sunday update on a Monday! 📸 1. I realized I

This week was a lot of fun. We did all the classic

This week was about trying to get back to routine

Hello! My name is Jessica & I am the content creator of J is for Journey; I started this blog way back in the fall of 2013 when I left to teach English Italy. And here I am, many years later, still blogging about travel, art history and religion – my three great passions in life. Now, with the birth of our son, I have added a fourth passion: motherhood. I hope you enjoy the journey!