In preparation for my NEH Summer Institute, Reverence for Words: Understanding Muslim Culture through the Arts, I received a package in the mail that contained your usual welcome forms and letters along with a book of poetry and a DVD, Islamic Art: Mirror of the Invisible World. I decided to plop down while folding laundry a few weeks ago to watch the documentary. The film quickly enchanted me and immediately got my teacher brain working: how can I use this in my classroom?

The film is 90 minutes and covers an astonishing geographic and historical landscape. It is absolutely perfect for the AP Art History classroom. With this post I am going to break down how it incorporates the images from the AP Art History 250 so you can decided if you want to use it in your classroom this upcoming year. I have also included the Amazon link HERE if you’re interested in purchasing the DVD (FYI it is an affiliate link, therefore I can receive some compensation).
The film is divided into five thematic segments: Word, Space, Ornament, Water, and Color. This thematic handling of the material allows for it to cut across global boundaries noting the continuities and distinctiveness in each islamic civilization. In my classroom, I would probably use this to review the Islamic art but it is done in such an instructive manner, I don’t think it would hurt to introduce Islam either! 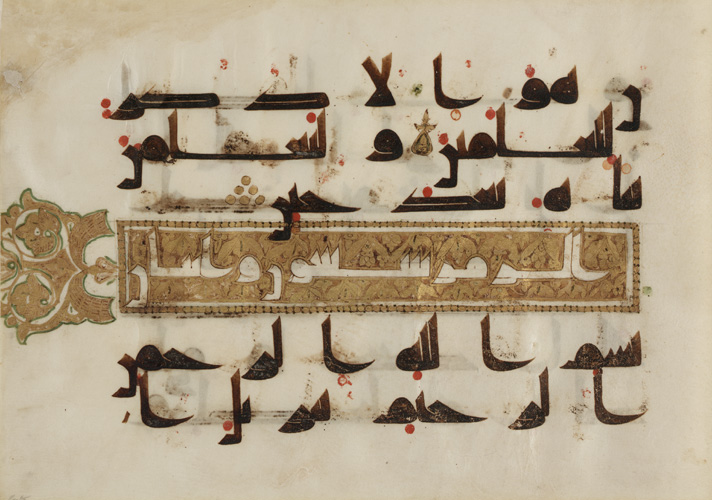 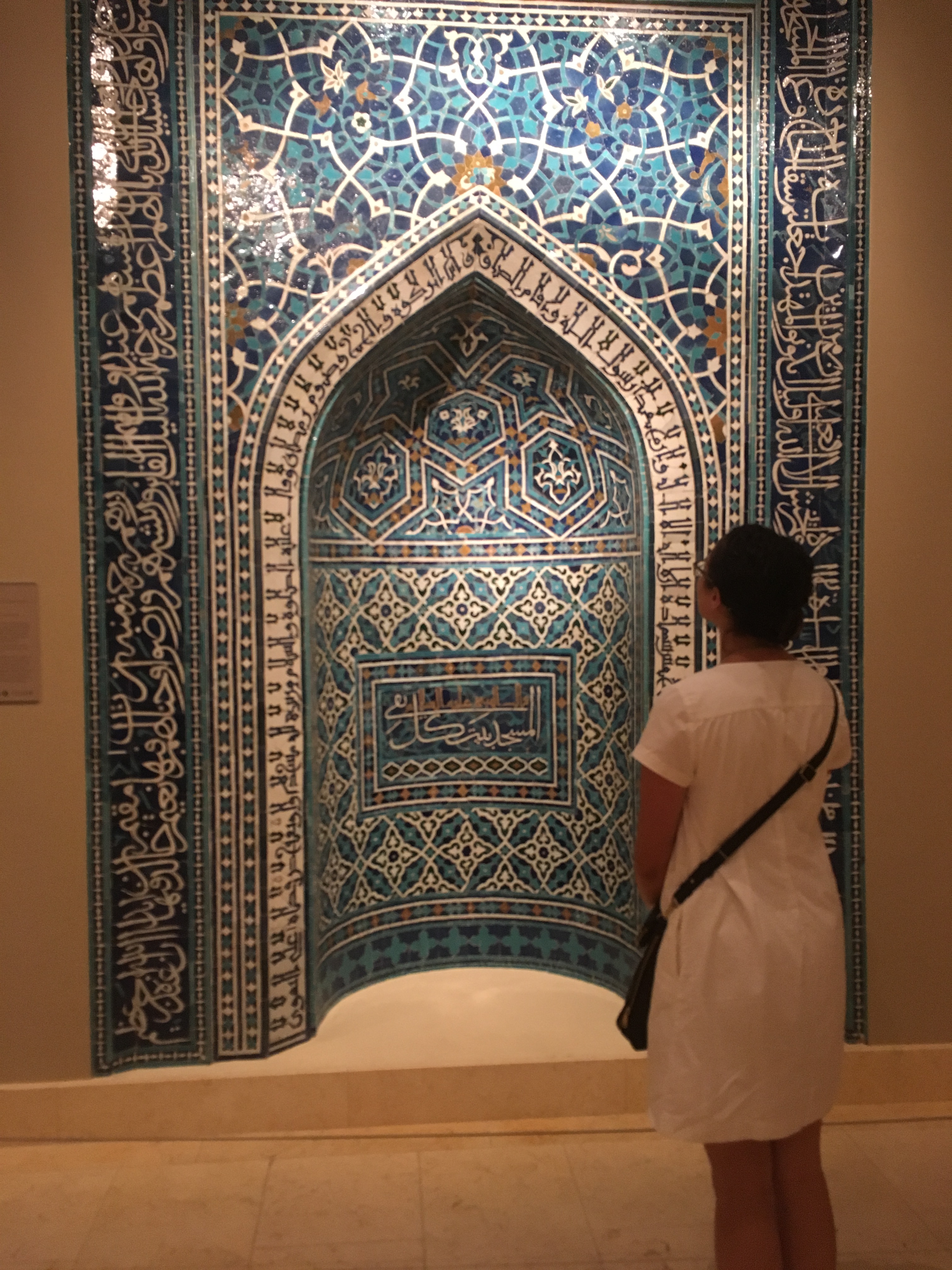 Word
The Qur’an is the obvious thing that comes to mind with this theme, calligraphy illuminating the revelations of Allah are an all-encompassing importance in Islam. However, calligraphy goes beyond the pages of the Qur’an to the walls of mosques and other Islamic shrines. This section of the video looks at the spiritual importance of calligraphy in Islam and shows you the method of writing as well as the architectural incorporation of text.
Images from the 250 that correlate with the film section “Word”: 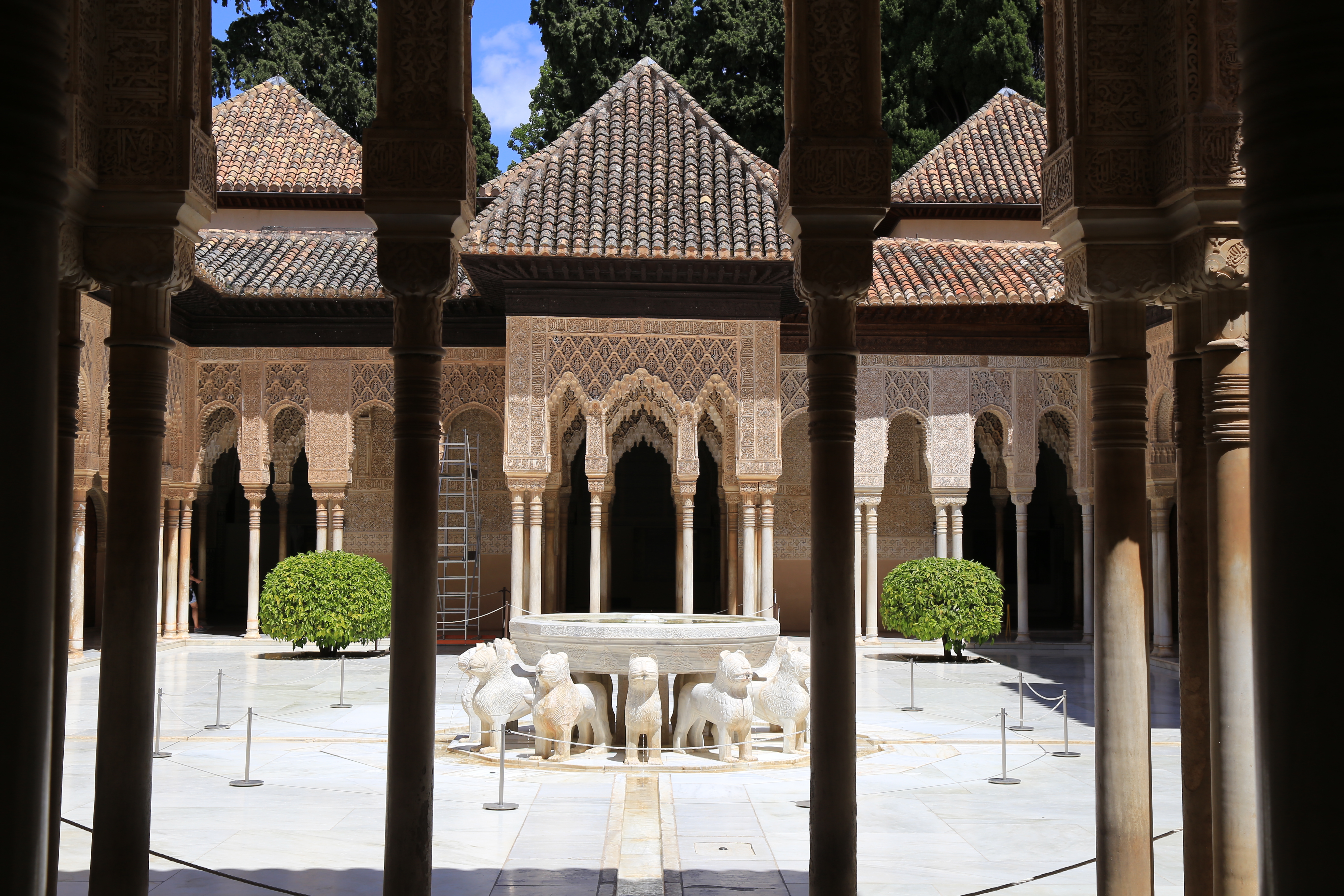 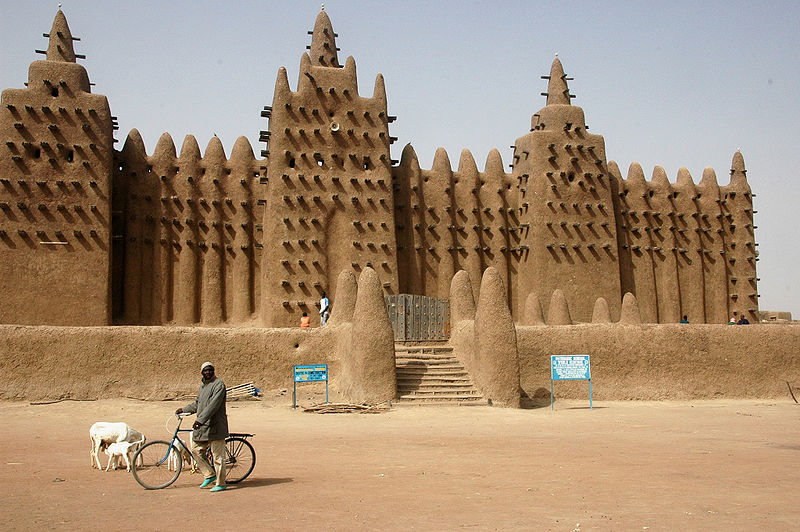 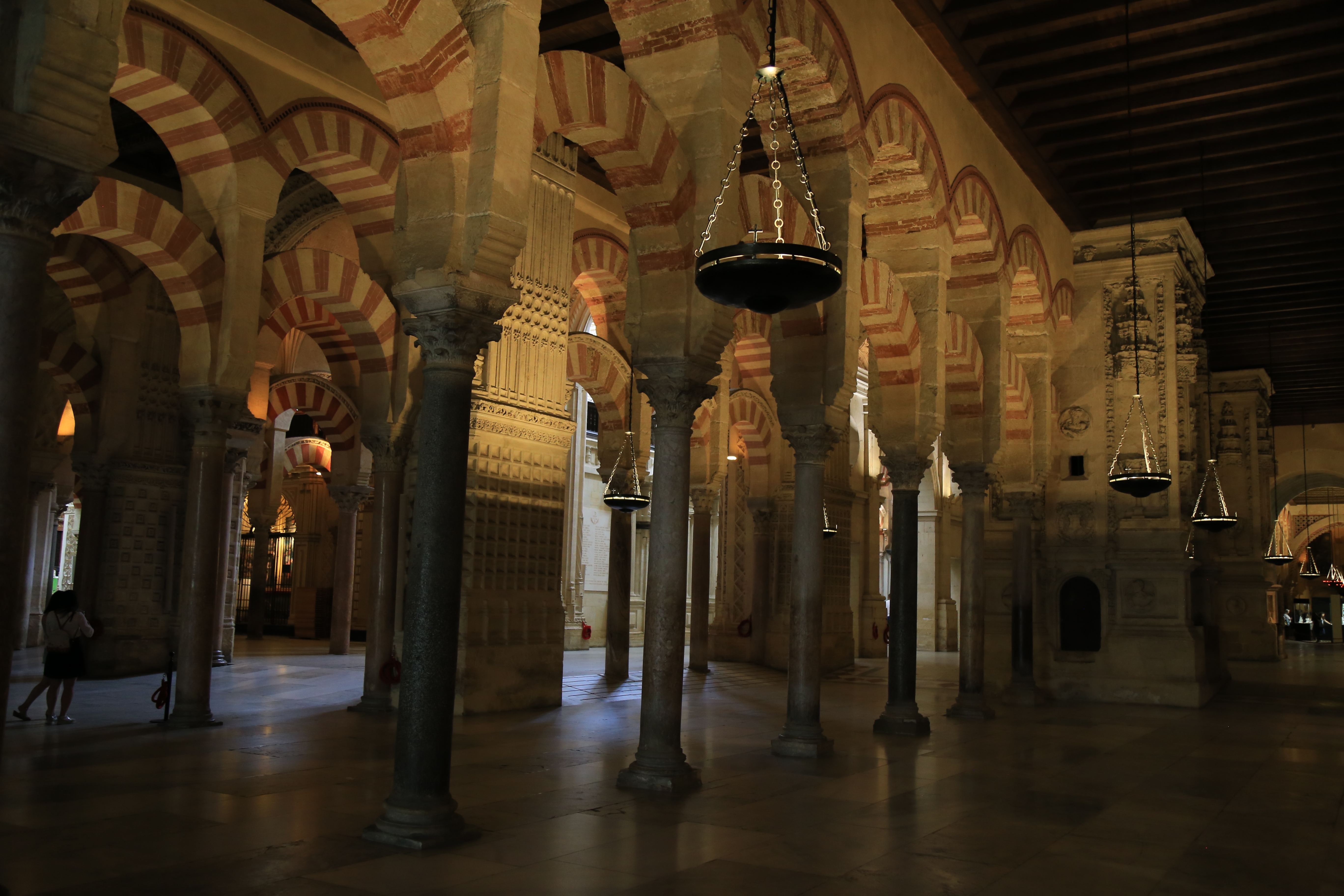 Space
Architecture is the key to this section, both of mosques and courtly palaces. The video does a great job of showing the key elements of mosques from around the world in their form and function while also highlighting cultural distinctiveness from the Iberian Peninsula to Mali to the Middle East and India. The part about the palaces focuses on the lush gardens created to invoke the heavenly paradise, especially sumptuous are the scenes from the Generlife from the Alhambra in Southern Spain. Personally, it is so hard to teach what space feels like from just using still images, so this documentary is perfect to give the students a sense of what these spaces are actually like for a visitor or worshiper.
Images from the 250 that correlate with the film section “Space”: 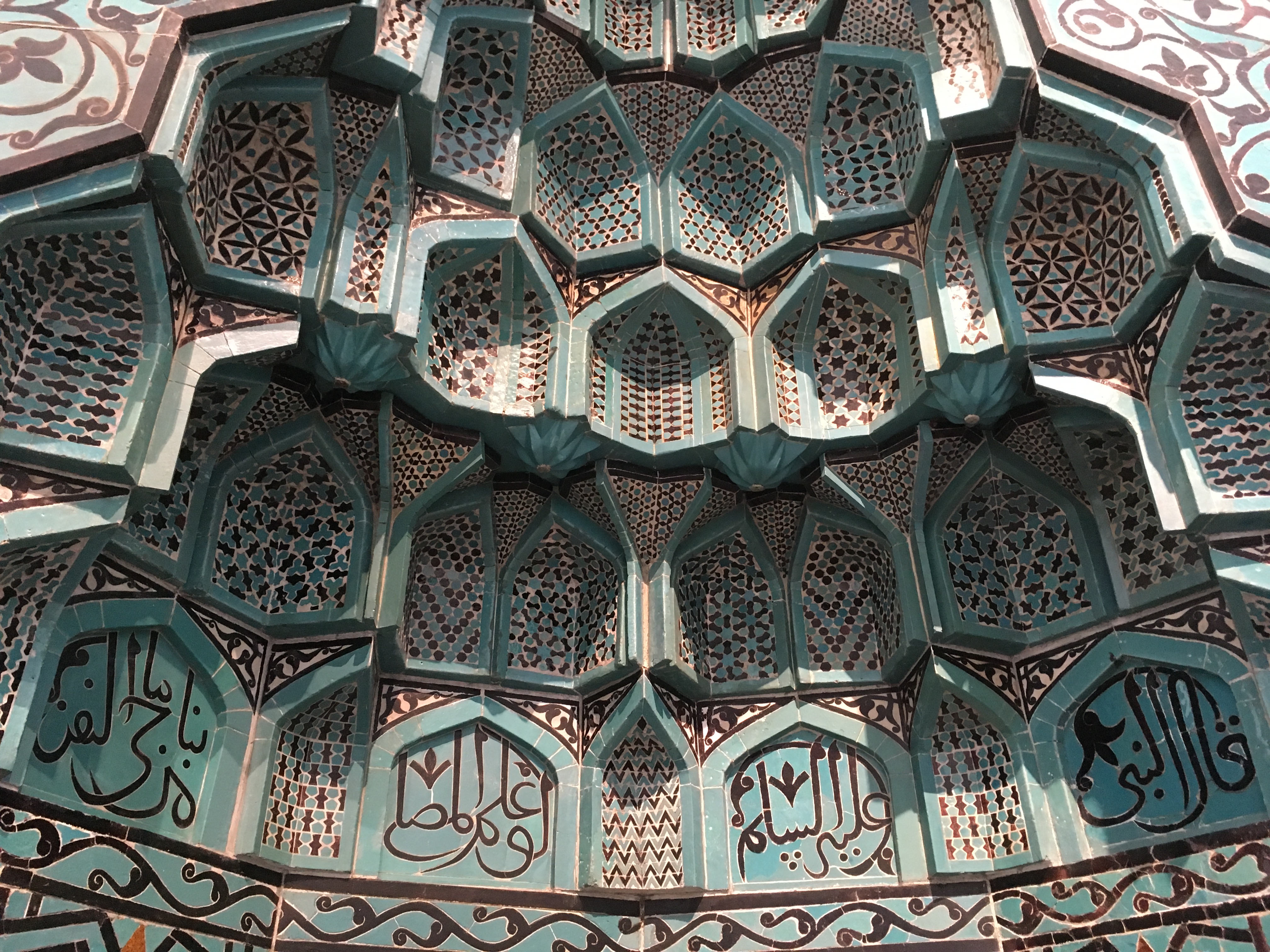 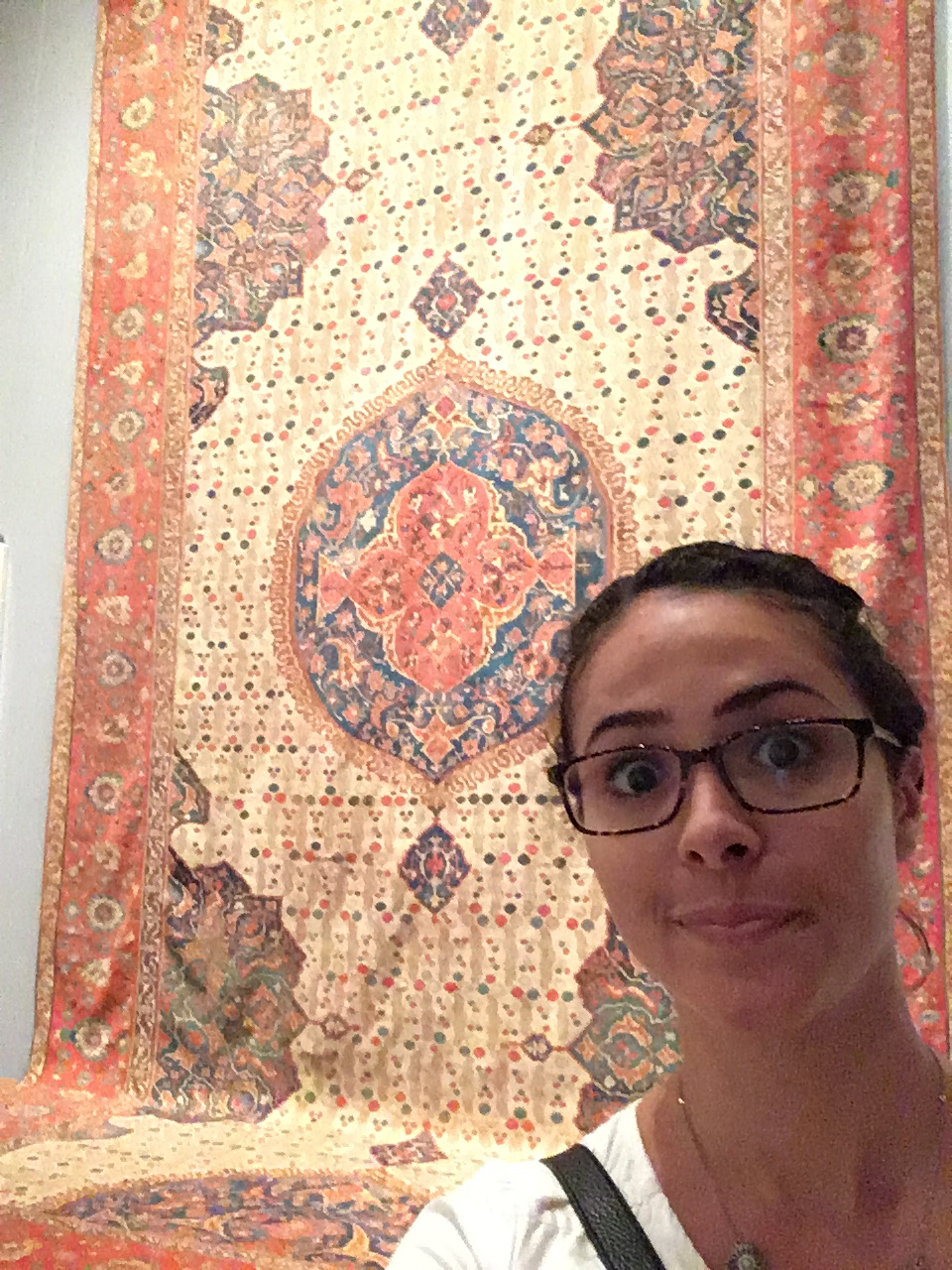 Ornament
This segment is about the Islamic emphasis on geometric patterning and vegetal design; from the smallest ivory box to the largest dome, everything is covered in a rich combination of complex shapes. These designs cover “everyday” objects used in the courtly life, such as carpets and water basin, to objects and spaces for religious worship, like the walls of a mosque or the covers of Qur’ans. It is wrongly assumed that Islam does depict figural art (images depicting humans or animals), while it is true that you will not find figures in religious buildings or objects like in Christianity, they can be found all over objects used in a secular context.
Images from the 250 that correlate with the film section “Ornament”: 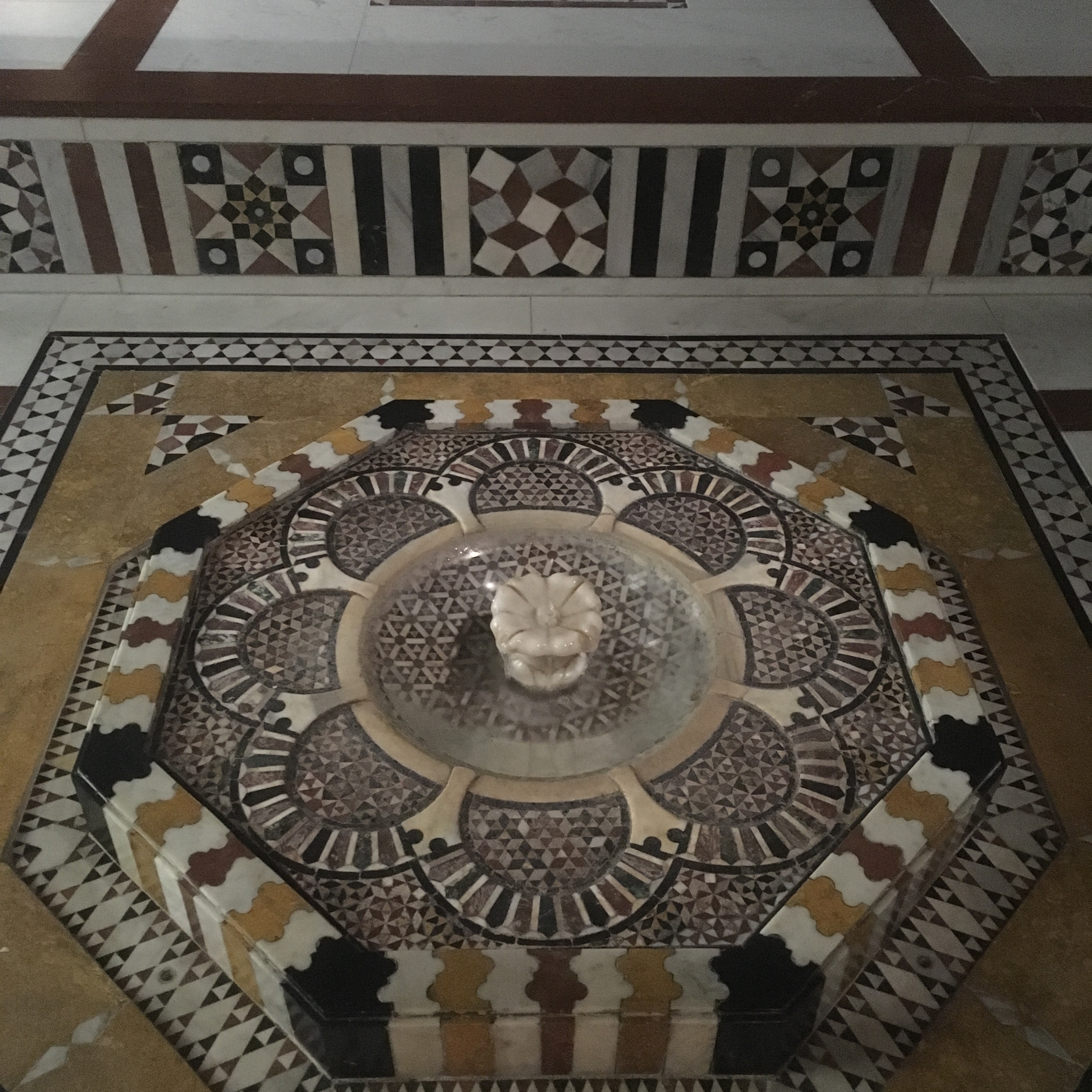 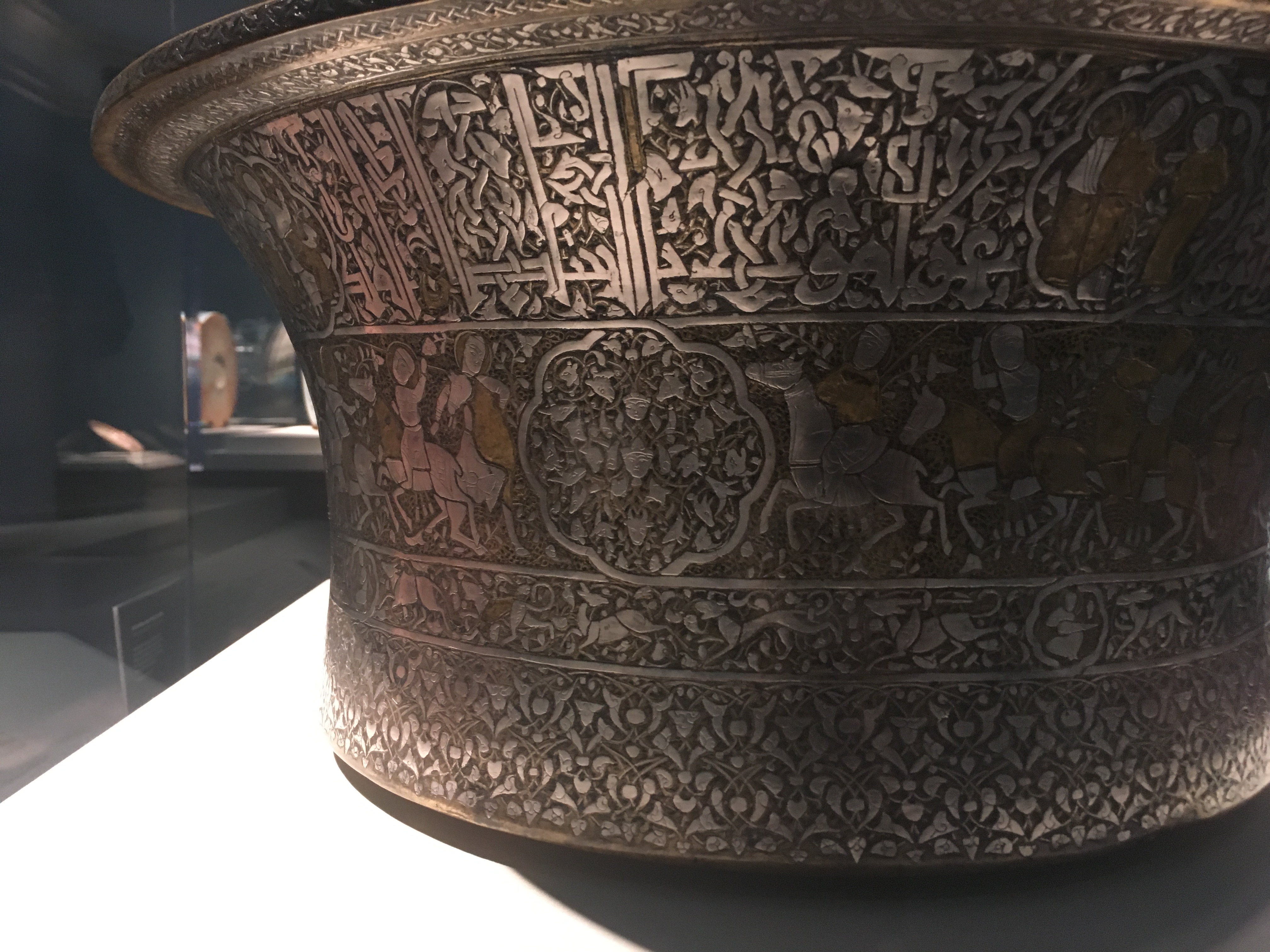 Water
Islam originated in the Middle East, which is a region that regularly encounters water scarcity, thereby making it more sacred in a cultural context. Muslim societies had to be creative with their water supply and storage. Islamic art celebrates water by creating gorgeous vessels for the use of water at the courts, in the gardens, and in the courtyards of mosques for the ritual purification. Water even plays an important part in Islamic cultures outside the Middle East, such as the fountains in the gardens of the Alhambra and the monsoon rains in Mali.
Images from the 250 that correlate with the film section “Water”: 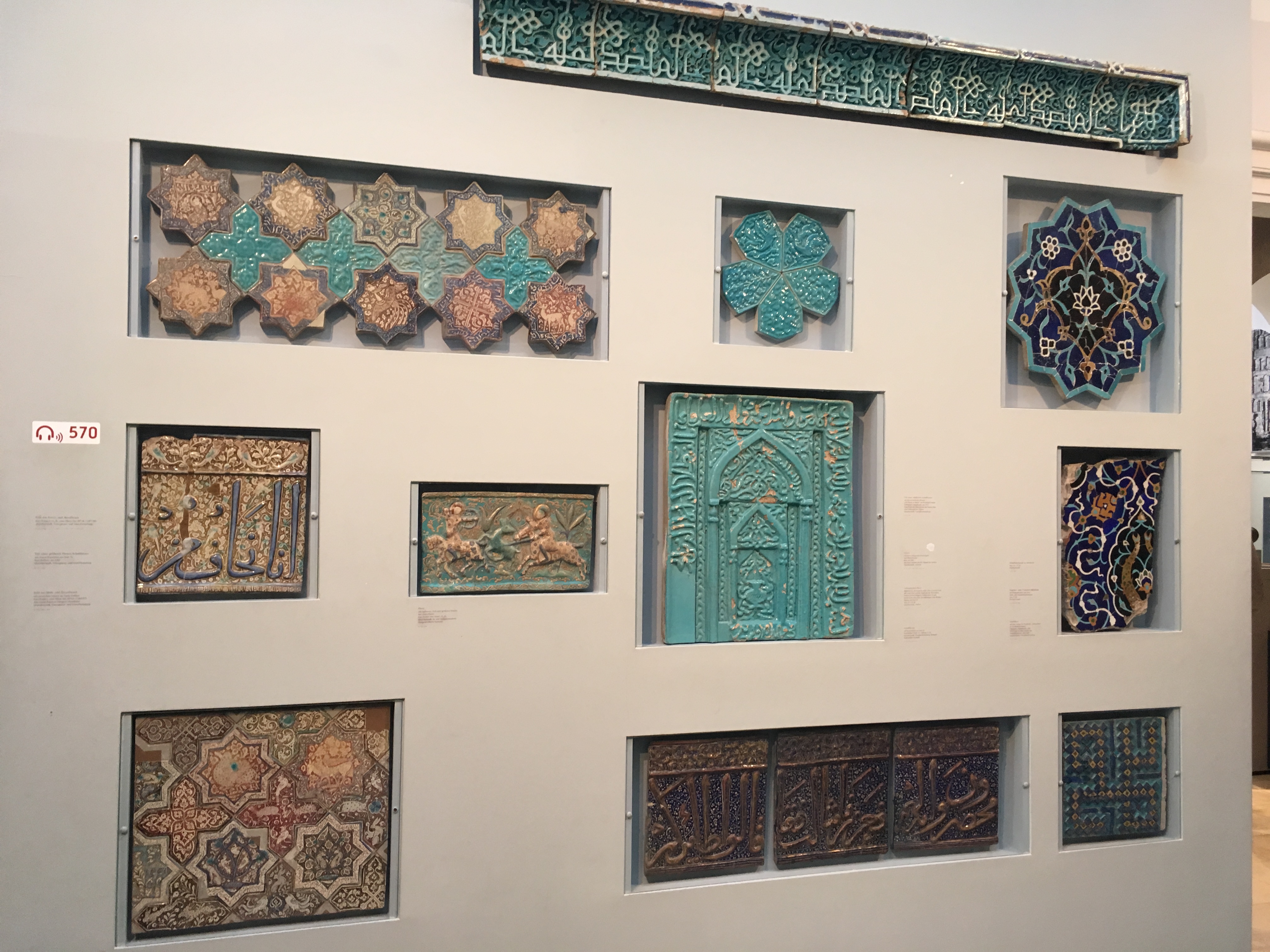 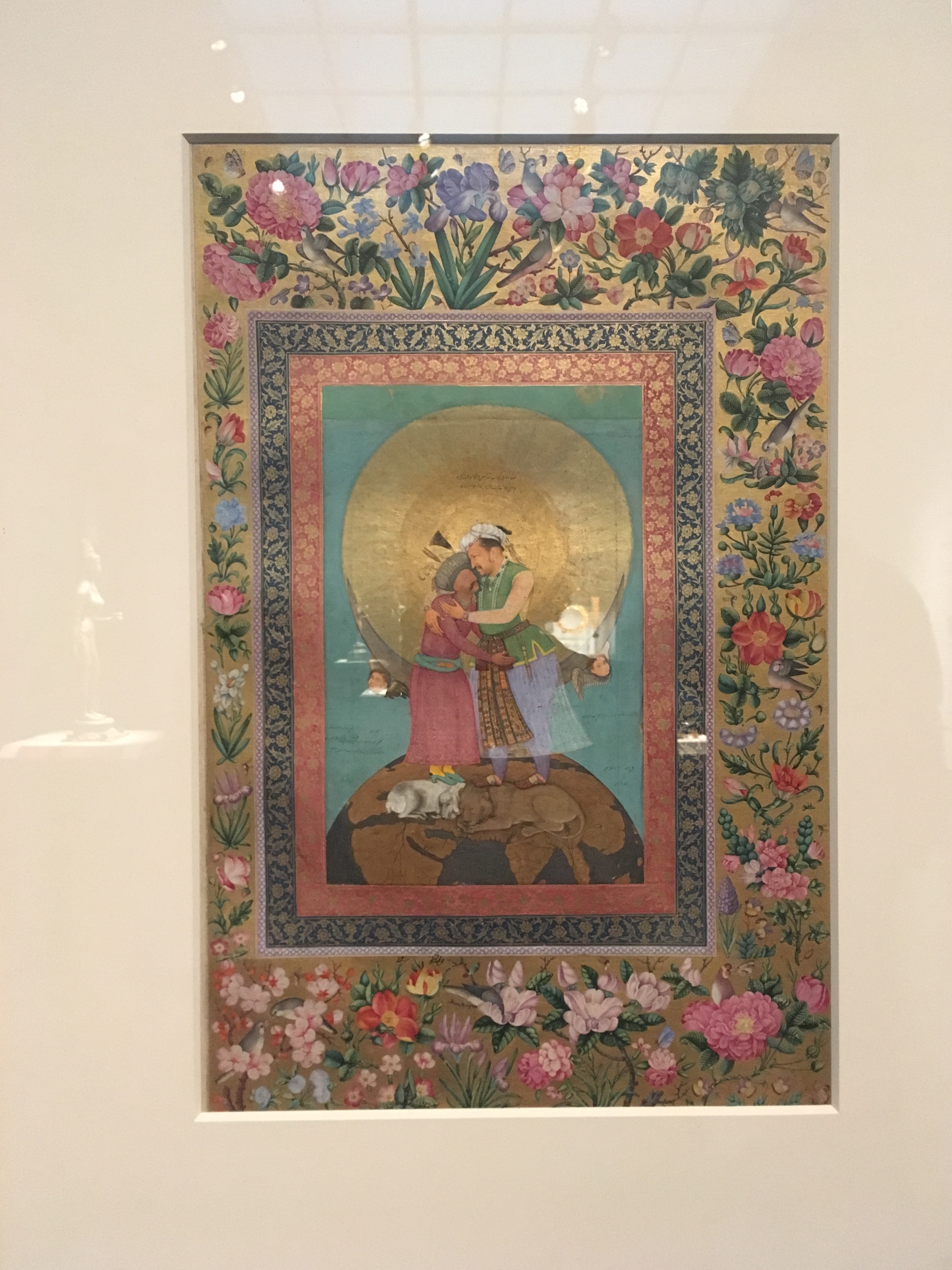 Color
In places barren of water, there is typically a lack of color in nature also. Therefore, Islamic cultures in the Middle East purposely infused their lives with vibrant colors. Houses and mosques were filled with colorful rugs on the floor and glazed tile along the walls, the most famous tile color being the cobalt blue found in Iran. Coupled with the geometric patterns favored by Islam, these colors seem to dance and swirl off the surface. While in Mughal courts, the vibrancy of Hindu art is blended with Islamic style in gorgeous illuminated manuscripts.
Images from the 250 that correlate with the film section “Color”:

I hope that was helpful in breaking down the documentary, I found it an enriching film that I will certainly be showing my students in the future! 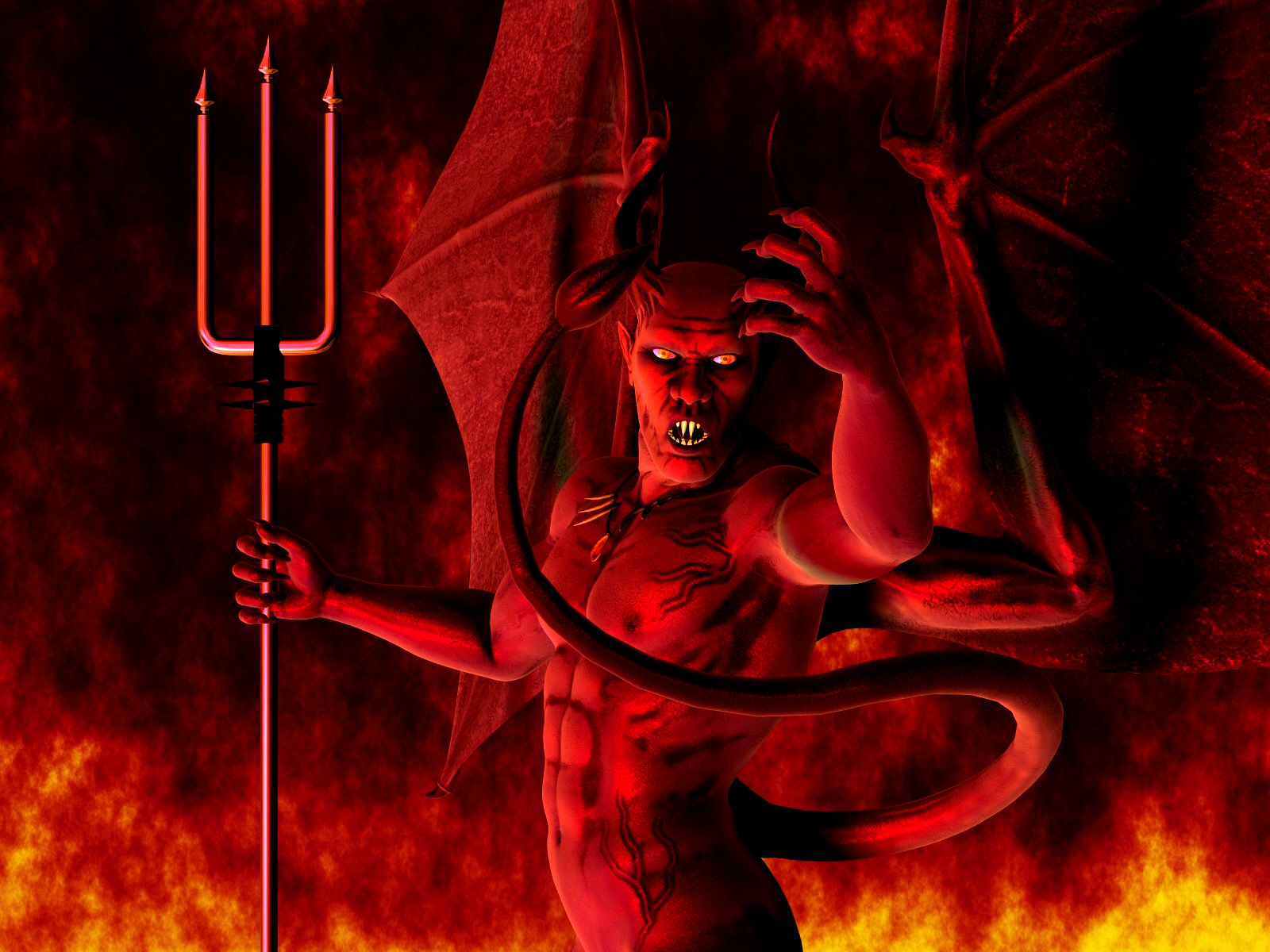 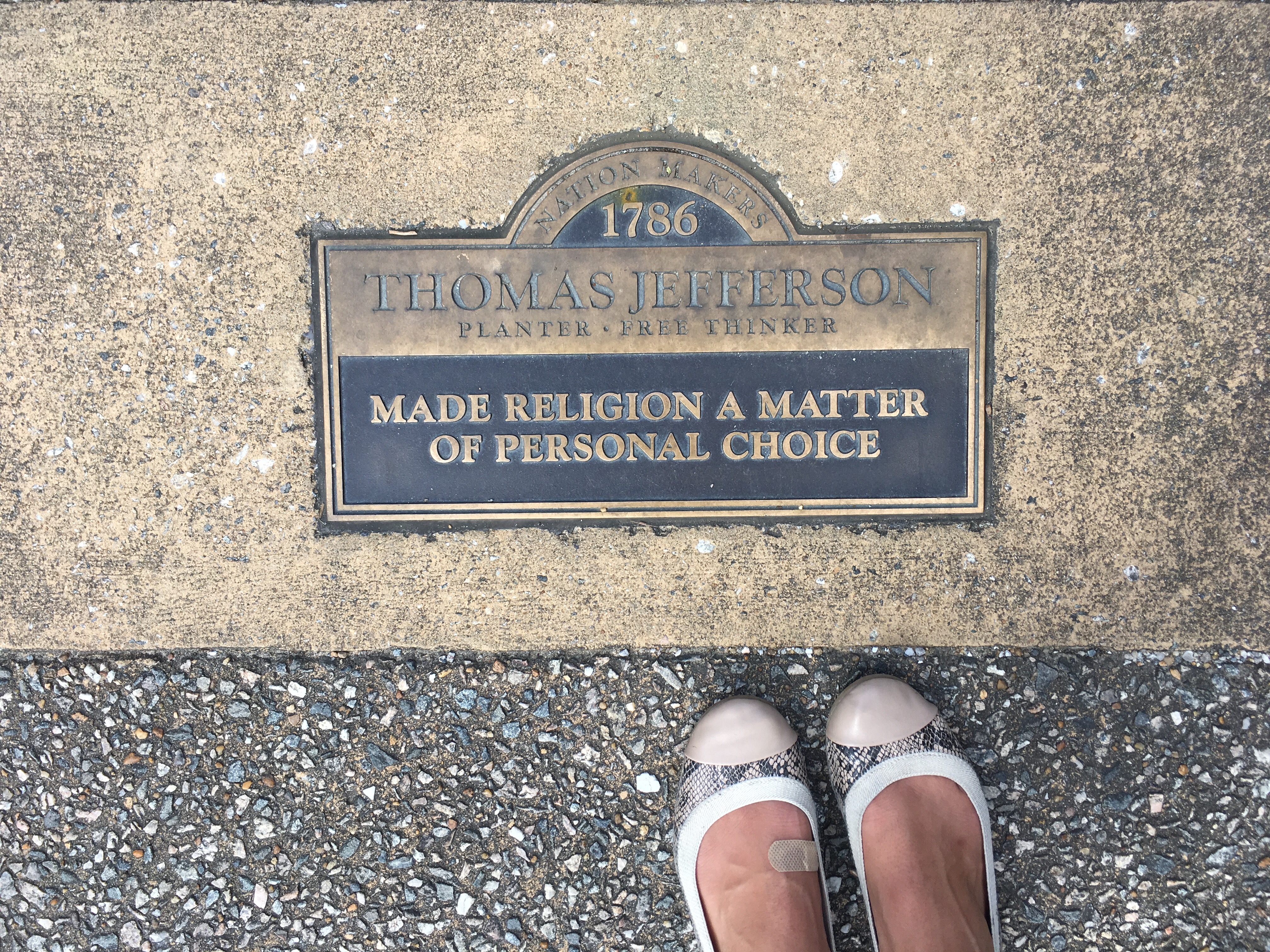 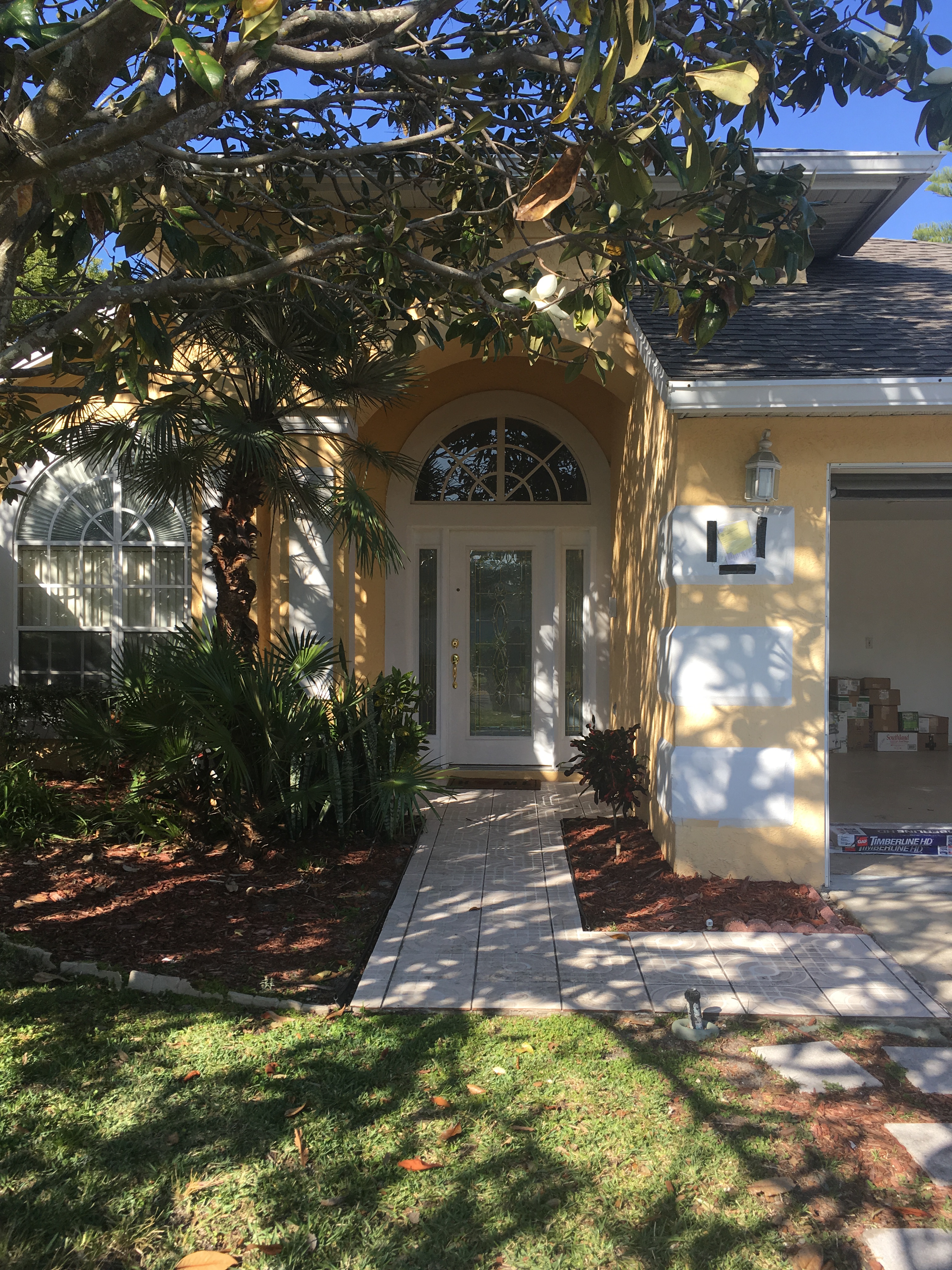 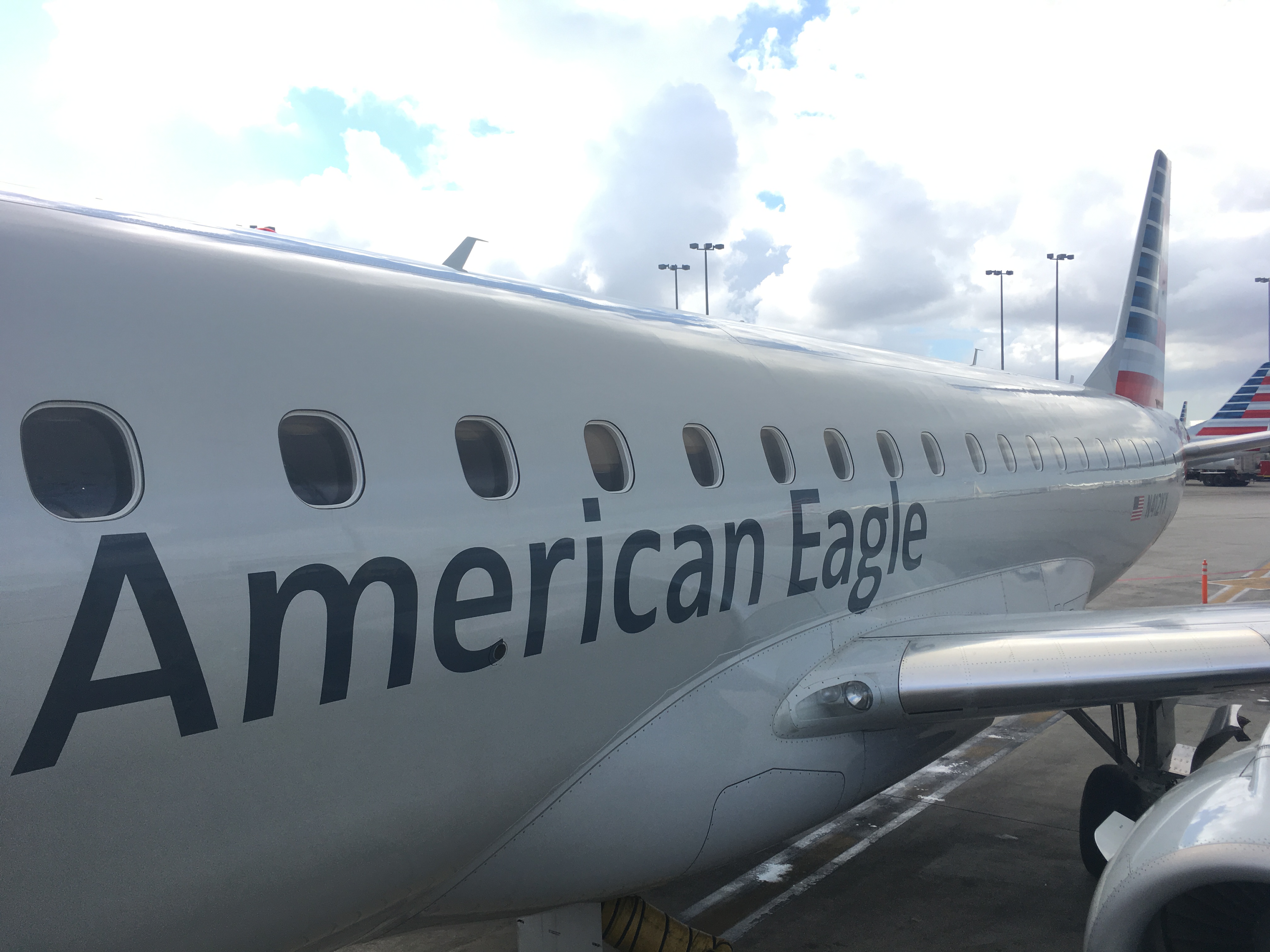 Travel Tips: Planning a Trip when Money is Tight